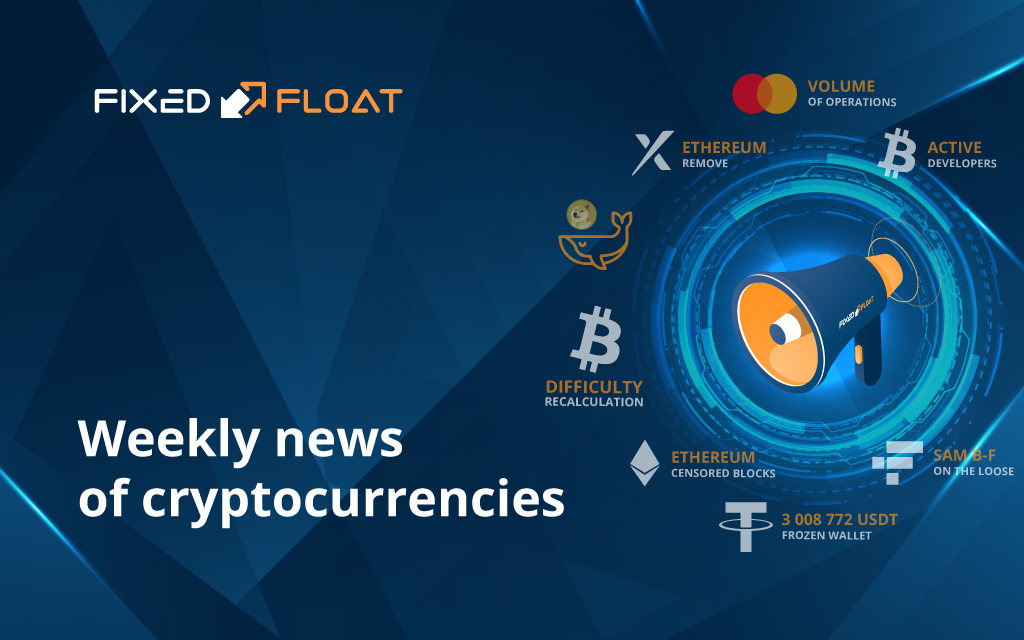 Another recalculation of the complexity of Bitcoin mining

The other day there was another recalculation of the complexity of Bitcoin mining, as a result, the indicator increased by 3.27%. Mining difficulty is a value that changes every 2,016 blocks based on the time spent mining new blocks. If blocks are mined quickly, the difficulty increases. If it is slow, it decreases. The complexity of mining protects against DDoS attacks and 51% attacks.

Paxful is a very popular service in Africa with 11.6 million users. The head of Paxful, Ray Youssef, said that for him honesty is above income. He explained the removal of ETH by the fact that the network switched to PoS, the lack of network decentralization and widespread fraud among ERC-20 tokens.

The crypto community reacted ambiguously to the transition of Ethereum to PoS. One of the main concerns was the increase in censored blocks. Miners can reject transactions that do not meet the requirements. On November 21, the peak of censored blocks was 79%. But then the indicator began to decline. This is due to the appearance of new repeaters - Agnostic, Relayoor, Ultrasound and Aestus. They do not censor transactions and attract validators. At the moment, out of 10 available repeaters, 6 do not censor transactions.

Once again, Tether has frozen the address. This time, the balance of the address was 3,008,772 USDT on the TRON blockchain. For all time, Tether has already blocked 435.5 million USDT at 810 addresses.

At the moment, there are only 40-60 active developers on the Bitcoin network. It is amazing that despite such a small number of developers, the capitalization of the first cryptocurrency can compete with such financial giants as Visa and MasterCard. Since the creation of Bitcoin, 1140 developers have worked on the project at various times. The number of active developers is constantly changing, specialists work all over the world.

On Thursday, a New York federal judge released founder Sam Bankman-Fried on $250 million bail. Bankman-Fried left the courtroom accompanied by his parents, lawyers and security service. He is required to appear in court on January 3 at the next hearing.

A large Dogecoin holder sent approximately 3.8 billion DOGE, which is approximately $280 million, to a new address. As a result, he became the fifth Dogecoin whale.

Stablecoins overtake the world's largest payment services in terms of transaction volume in 2022, and even the prolonged crypto winter does not prevent this. During the year, $7.4 trillion was committed. In just 2 years, stablecoins have increased these indicators by 600%. In 2020, their turnover was $1 trillion, in 2021 — already $6 trillion. Stablecoins were second only to Visa, whose transaction volume amounted to $12 trillion. The share of stablecoins in the cryptocurrency market is 18%.