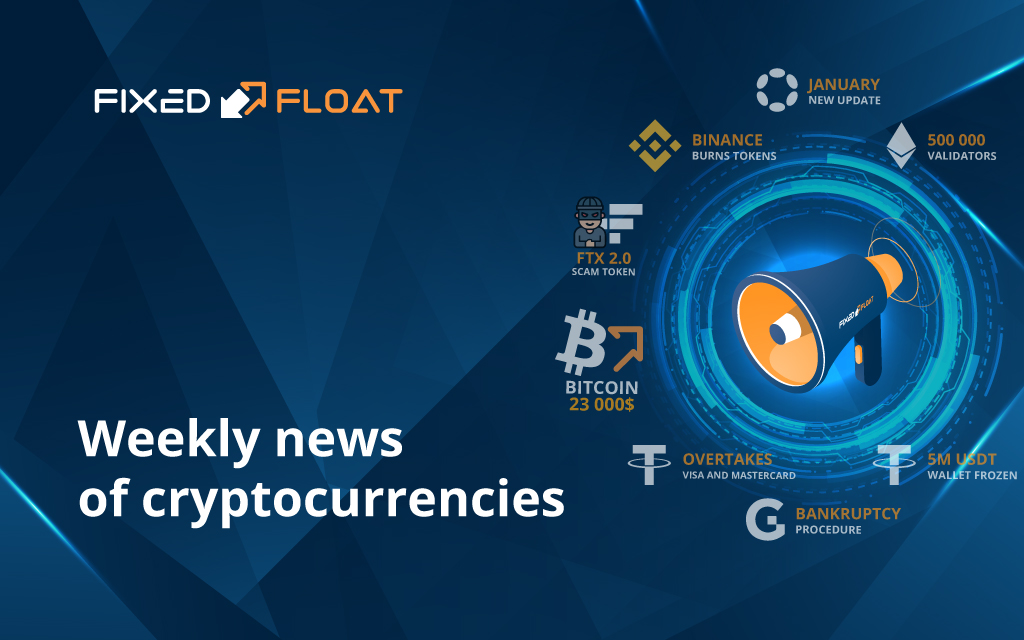 USDT overtakes Visa and Mastercard in terms of financial transactions

Tether USDT processed $18.2 trillion worth of transactions in 2022, outperforming traditional payment processors such as Visa and Mastercard. By comparison, Mastercard and Visa processed $14.1 trillion and $7.7 trillion in transactions, respectively. The high volume of Tether transactions is indicative of the massive growth of stablecoins in recent years. Despite the challenges facing the crypto industry, stablecoins are gaining popularity.

The number of validators in the Ethereum network exceeded 500,000

According to statistics, as of January 2023, the number of Ethereum network validators on the Beacon chain exceeded 500,000. On January 11, 2023, Ethereum developers launched a new testnet for the Shanghai Update, a hard fork expected to occur in March 2023. The new dev test environment is called "devnet 2".

With the release of devnet 2 the next day, the network passed the milestone with over 500,000 validators. To become a validator, an individual or organization must physically manage a validator client on the Beacon Chain and have 32 ETH.

The Polkadot network has been updated

Polkadot carried out an update 15 months later, as a result of which functionality was launched that allows parachains to more securely interact with each other without the use of bridges. Parachains are customizable project-specific blockchains integrated into the Polkadot networks.

Fraudsters took advantage of the hype and created the FTX2.0 scam token

A token called FTX 2.0 is distributed to cryptocurrency users from a real FTX address. Cryptocurrency cybersecurity company PeckShieldAlert warns that the token is being distributed by scammers “impersonating FTX exchange to add liquidity” to Justin Sun, Kucoin and Binance. The activity, according to the firm, is intended to fool "people into thinking this is an official FTX airdrop."

Tether has frozen a wallet with a balance of 5,000,000 USDT on the Ethereum blockchain. Tether has blocked 444.3 million USDT across 828 addresses so far.

The leading digital currency, bitcoin, is set to break the $23,000 price mark for the first time since August 2021 ahead of Asia's Lunar New Year celebrations.

Binance exchange burned 2,064,484 BNB worth $618 million in its 22nd quarterly coin burn, or 1.3% of the total supply. Coin burning is a mechanism used to remove coins from circulation, resulting in a permanent reduction in the total supply of coins. Many cryptocurrency projects periodically burn coins to create a deflationary effect.

Genesis Global Holdco LLC, the parent company of crypto lender Genesis, filed for Chapter 11 bankruptcy protection late Thursday in the Southern District of New York after it became embroiled in the aftermath of the collapse of cryptocurrency exchange FTX Trading Ltd.

The company listed more than 100,000 creditors in its filing, with liabilities ranging from $1.2 billion to $11 billion, according to bankruptcy filings. Earlier this month, Genesis announced it was laying off 30% of its workforce, reducing its workforce to 145 people. In August, the company fired 20% of its employees.