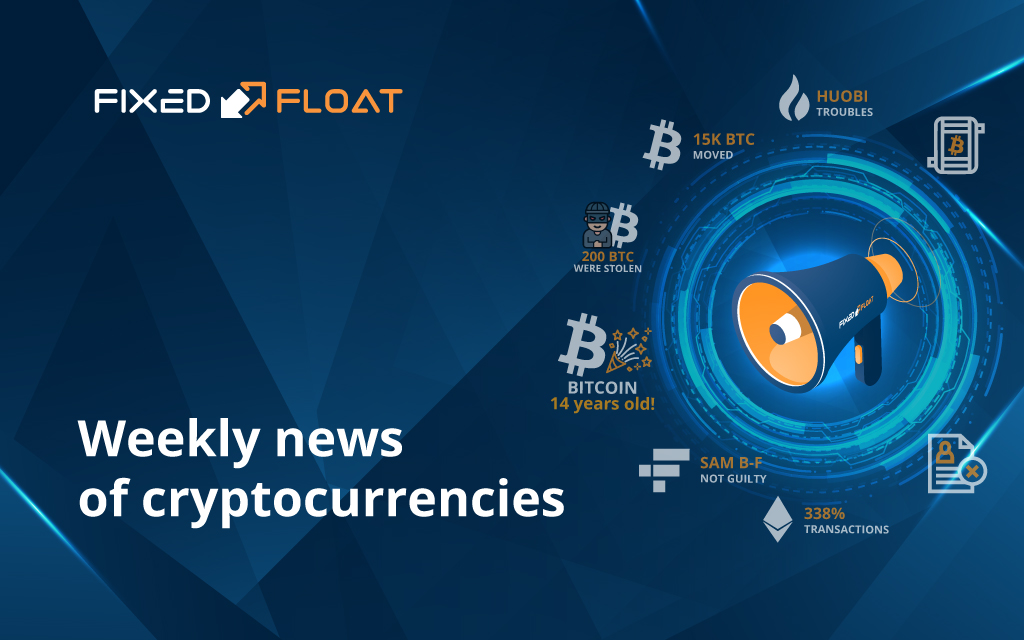 On January 3, Bitcoin celebrated its birthday! The main cryptocurrency is 14 years old. It was 14 years ago that the original block of the network was mined by the creator of Bitcoin under the pseudonym Satoshi Nakamoto. In the hash of the genesis block, Satoshi indicated the title of The Times article “Chancellor on brink of second bailout for banks.” Absolutely anyone could run their own node on any computer and mine 50 BTC in a few hours.

Sam Bankman-Fried pleaded not guilty Tuesday to criminal charges of defrauding investors and bankrupting FTX, causing billions in losses. Bankman-Fried is accused of stealing FTX customer deposits to support his Alameda Research hedge fund, buying real estate and donating millions of dollars to political causes. The prosecution claims to have a lot of evidence against Bankman-Freed. The court named the trial date for October 2.

A major Bitcoin hodler that has not been active for over 3 years suddenly sent a transaction worth 15477 BTC. The transaction fee was $36.

Heatbit says their innovative heaters can heat a room the size of a small studio apartment while mining enough BTC to offset at least a portion of a homeowner's monthly electricity bill. So far, about 1000 devices have been sold worldwide. The device has integrated circuits inside, which perform the calculations for mining coins. Thus, the owners receive rewards and warmth. The device has a low noise level, aesthetic appearance and WiFi compatibility, but is still considered expensive - its price is $1200.

Over the past year, the number of transactions on the Ethereum network has exceeded Bitcoin by 4 times. But Bitcoin is still the most popular cryptocurrency in 2022. However, transaction volumes on the Bitcoin network have been more consistent and intermittent than on the Ethereum network, where there has been much greater volatility in transaction volumes. This was due to spikes in demand at certain times such as the launch of the NFT and other gas related events such as the minting of XEN.

Top crypto companies fired from 10% to 51% of the staff

Coinbase ranks first on the list of firms with the most layoffs in 2022, with about 1,160 employees losing their jobs. It is followed by Kraken, which laid off about 30% of employees, which is 1100 employees. Bybit was not far behind, laying off 1,020 people. The bear market has had a bigger impact on cryptocurrency exchanges, as they are on fees. The prolonged bear market led to a sharp drop in trading volume, which put them before the decision to lay off.

Bitcoin developer Luc Dashjr reported that his key was compromised, resulting in the theft of over 200 BTC ($3.5 million).

The network is actively discussing rumors about the problems of Huobi

News has appeared on the network that the management of the Huobi exchange is going to cut 20% of the staff. Justin Sun, who serves as an adviser to Huobi, called the rumors untrue. But still, in recent weeks, Huobi has often been mentioned in negative news. There were also reports on the network that the management of the exchange plans to cut salaries, lay off up to 60% of the staff and transfer employee salaries to USDT and USDC. Huobi also experienced an outflow of $85 million, which is approximately ~3% of total assets.