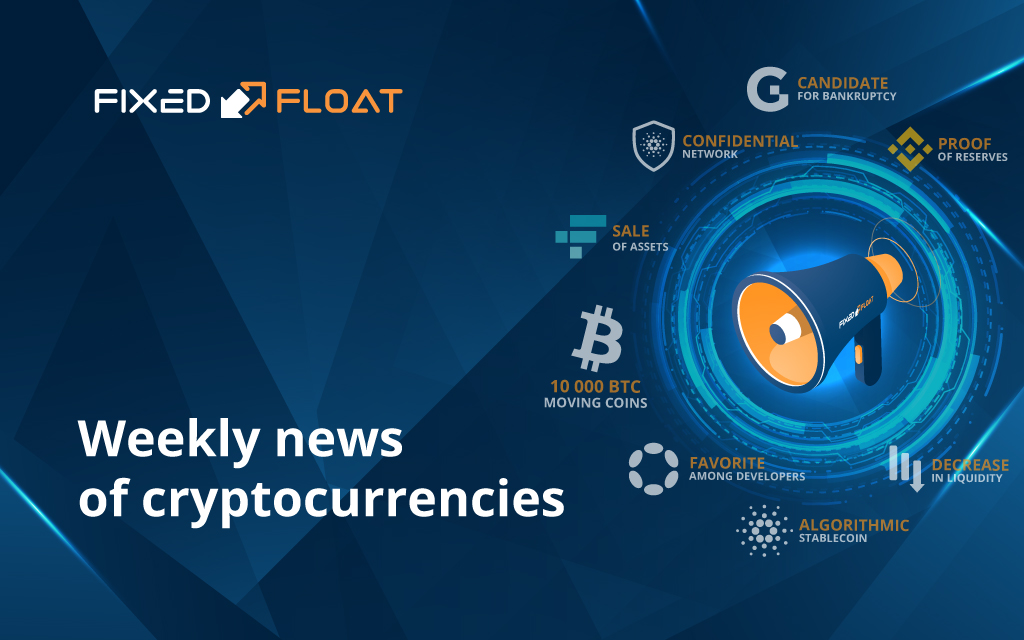 Alameda and FTX played a key role in the market. After their fall, the community faced a reduction in liquidity. Alameda was one of the largest market makers. So, in the glass of BTC on the Kraken exchange, the depth was reduced by 57%, on Binance there was a fall of 25% and Coinbase by 18%. In general, large market participants are behaving cautiously, reducing their positions on centralized exchanges.

Cardano's Input and Output Global (IOG) plans to launch a new privacy-focused blockchain named Midnight and a token called Dust. The new chain joins the list of side chains deployed around the Cardano network. Charles Hoskinson, CEO of the Cardano network, announced during an event in Edinburgh, Scotland. Stating that the project will employ the Zero-knowledge proof technology. Midnight will create a balance between privacy and regulatory compatibility.

Hoskinson says "Midnight has evolved privacy-coin technology where everything was anonymous by default, which is what Zcash and mMonero did with Snarks and ring signatures." Hoskinson further stated that " this is a completely new way of writing and running private smart contracts and private computation. So you can have a private DEX (Decentralized Exchange) or mine an anonymous data set or these things."

Recent developments within the crypto community have put Polkadot on the lips of many a crypto pundit. More so, the parachain network led the crypto herd this month in development activity. The news added to the satisfaction of DOT holders, confirming that Polkadot aims to make its mark and solidify its position as a force to reckon with in the crypto space.

Just a few days after FTX's collapse, crypto big guns are already thirsting over assets of Bankmann Fried's FTX. Notable among interested parties include Justin Sun of the TRON network and Brad Garlinghouse of Ripple labs. According to official reports, Justin sun is the second crypto CEO to have set his eyes on FTX assets. Brad Garlinghouse beat Sun to the party as Garlinghouse already showed interest in purchasing some of the FTX's assets before the crypto giant filed for bankruptcy. However, Garlinghouse, like CZ, shelved its decision to take on the sinking ship due to FTX’s bankruptcy filing.

Binance has released its first Merkel Tree Proof of Reserves (PoR) system to demonstrate transparency in the wake of the collapse of the giant FTX exchange. So far, only the BTC reserve is being shown. According to the system, Binance has a reserve of 582,485.9302 BTC and 575,742.4228 BTC in clients' net balance. ETH, USDT, USDC, BUSD and BNB will be added in the future. The exchange noted that it covers the deposits of its customers 1:1 with its reserve.

The promising Cardano stablecoin project died before it came to life

Ardana, promising Decentralized Finance (DeFi) and the stablecoin project, has closed shop, blaming "funding and project timeline uncertainty" as reasons for ending the project. The Ardana team, however, stated the project will remain open-source for builders. In contrast, treasury balances and remaining funds will be held by Ardana Labs "until another competent dev team in the community comes forward to continue our work." Ardana further stated that "development on Cardano has been difficult with a lot of funding going into tooling, infrastructure, and security. This, alongside the uncertainty around development completion, has led to the best course of action is halting the development of dUSD."

The decision to halt the project's development surprised the crypto community, as the crypto community has high hopes for the project. However, keen followers of the Ardana project were not too surprised at the project's decision, arguing that the Ardana project had been plagued with several issues. Crypto pundits cited the plummet of DANA, Ardana's native token, and the value decline of the ADA might have contributed to the project's death. Ardana blamed the Cardano network's liquidations issues and risk to user's funds for its delays after it claimed "almost all of the product/smart contract development is finished” and that they “could launch products within a few weeks if wanted."

Genesis is struggling with funds, rumors have appeared in the media about a possible bankruptcy. For the past few days, Genesis has been looking for $1 billion worth of new capital. This is caused by a lack of liquidity from the lender following the sudden collapse of FTX. Genesis is a counterparty to many digital asset companies and is closely watched as an indicator of the strength of the industry.

On November 23, an unknown person moved 10,000 BTC ($165 million at the time of withdrawal) from a wallet associated with the BTC-e cryptocurrency exchange. The amount was split between two addresses. One of them received 6500 BTC, in the future these funds were no longer moved. It took 3500 BTC to the second address. A little later, this amount was divided into small transactions between different wallets.

Information appeared on the network that 65 BTC of these funds went to an address belonging to the HitBTC exchange. The ownership of other wallets has not yet been established. The transfer was the largest for a sender address since September 2017. Then 10,000 BTC were also withdrawn from it.