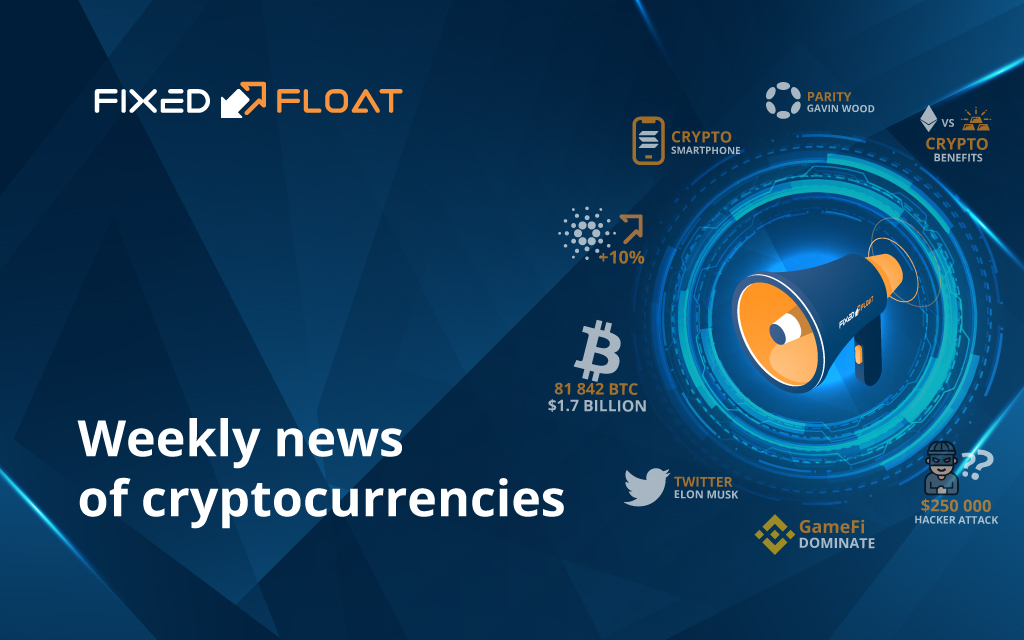 It has been an incredible week for the crypto market. The week gave birth to new partnerships as old ties were strengthened, welcome use-case expansion of cryptocurrencies, and introduced new technologies. The crypto community also fed off the positive sentiments surrounding the final purchase of the platform Twitter by Elon Musk.

Solana is about to launch the world's first crypto smartphone

Solana is partnering with OSOM to launch the first crypto smart phone. Although the announcement first debuted in June, there is renewed attention as Solana releases the features and specifications of the phone. The smart phone named the Solana Saga will be released in the first quarter of 2023 at $1000, however, interested users can pre-order on the official Solana website with a $100 deposit. The phone is based on the OSOM OV1, with a 6.67-inch OLED screen, a Qualcomm Snapdragon 8 plus Gen 1 processor, 12GB of RAM and 512GB of internal storage.

The phone will provide ample support for apps built on the Solana blockchain including the NFT magic Eden, Orca exchange, Phantom and Solana magic slack among others.

Gavin Wood, co-founder of the Polkadot network, steps down as CEO of Parity

This week, Co-founder of the smart contract platform Polkadot announced he is stepping down as the CEO of Parity technologies, the blockchain development outfit responsible for the Polkadot network. In a statement credited to Wood on the 21 of October, the 21 of October, the Co-founder of Polkadot stated he never wished for the CEO role; however, he could function as such as a period; he never saw himself perpetually playing the role. In Wood's own words, "anyone who has worked with me knows where my heart lies. I'm a thinker, coder, designer, and architect. Like many such people, I work best asynchronously. A good CEO needs to be available to others on a far more continuous basis. They need to enjoy representing the company, both internally and externally. They need to not be bothered by large swathes of their time becoming eaten up in meetings and calls with many multicolored boxes on their calendar."

Wood, however, revealed he would remain Parity Technology's biggest shareholder and Chief Architect, while the Co-founder of Parity would resume as the CEO. Wood added that he would devote his time to making the Parachain network and Web3 more accessible to the crypto community and beyond. He stated he would be focused on "exploring how we can contribute to making Polkadot and Web3 more relevant to large swathes of the population," adding that this will start by "helping the community design and build several interesting chain-integrated social primitives, which I think are crucial for us to deliver a true Web3 platform."

As the Web3 space welcomes increasing embrace, crypto giants race to dominate the GameFi sphere. As the rat race for Web3 domination slowly wears on, Binance Chain seems to be leading the mischief. Binance overtook Ethereum to top the leaderboard for Web 3.0 gaming. Ethereum had dominated the Web3 space for gaming with the launch of Axie Infinity on its platform; however, recent records reveal the BNB Chainq as the top dog within the GameFi kennel.

In a report entitled "the state of Crypto Q3," the Binance Chain afforded the community a great peak into the performance of crypto and DeFi ecosystems for the third quarter of 2022. The report confirmed BNB as the dominant player within the GameFi space, housing the highest number of games on its network and controlling a 36.6% share of the GameFi market. More specifically, the report identified action, adventure, and collectible as the leading genres, with an overwhelming majority released for web browsers.

Ethereum trails behind Binance with a solid 20.2% share of the GameFi market, while Polygon and Solana followed at 11.8% and 6.9%, respectively. Concerning market capitalization, BNB's GameFi was capped at approximately $1.5 billion. Gameta, a Play-to-Earn, Web3 project on the BNB Chain, led the game chart in the past month, recording about 2 million players. The Web3 space is still young with abundant potential for growth, and its reigns are, therefore, the taking. However, Binance sits on the GameFi Iron throne right now.

Cryptocurrency Cardano has grown by 10%

On October 25, a sharp increase in the Cardano rate was recorded. Following the rate, capitalization increased to $13.4485B. The highest figure in the history of the currency was $94.8001B. Cardano continues to delight its followers with active development, announcing new collaborations. So this week, the telemedicine service Citaldoc launched on the Cardano network. Citaldoc is testing payment with ADA cryptocurrency.

Hacker Avraham Eisenberg, known for hacking the Mango Markets marketplace, boasted of creating a token called Mango Inu and received $ 250,000 from its sale in half an hour. The launch of the token was aimed at bots that buy newly issued tokens.

Vitalik Buterin listed the advantages of cryptocurrencies over gold

Popular comics and book author Zack Weinersmith stated: “So the only argument I’ve heard about cryptocurrencies that makes sense in terms of the proponents’ own views is that they don’t want centralized power over money.”

Ethereum co-founder Vitalik Buterin responded to a remark by an American cartoonist and listed 3 main advantages of cryptocurrencies over gold. He called gold incredibly inconvenient due to its difficult use in transactions with unreliable parties, also noted that gold does not support secure storage options such as multi-signature, and gold is not as popular as digital assets. And summing up, Buterin called cryptocurrencies the best choice.

An unknown crypto investor transferred 81,842 BTC worth more than $1.7 billion, the transaction fee was 0.00003392 BTC, which is about 70 cents. A similar large transfer was noticed at the end of January in the amount of 46.6 thousand BTC.

Elon Musk has officially become the new owner of Twitter

Elon Musk has finally taken over Twitter, closing a $44 billion takeover of the company. Anonymous sources tell the media that Elon has already begun to make changes, firing the CEO, CFO and head of legal policy. Musk has previously criticized Twitter management for product decisions and content moderation. On the same day, Musk said that he hopes to make the social network "the most respected advertising platform."