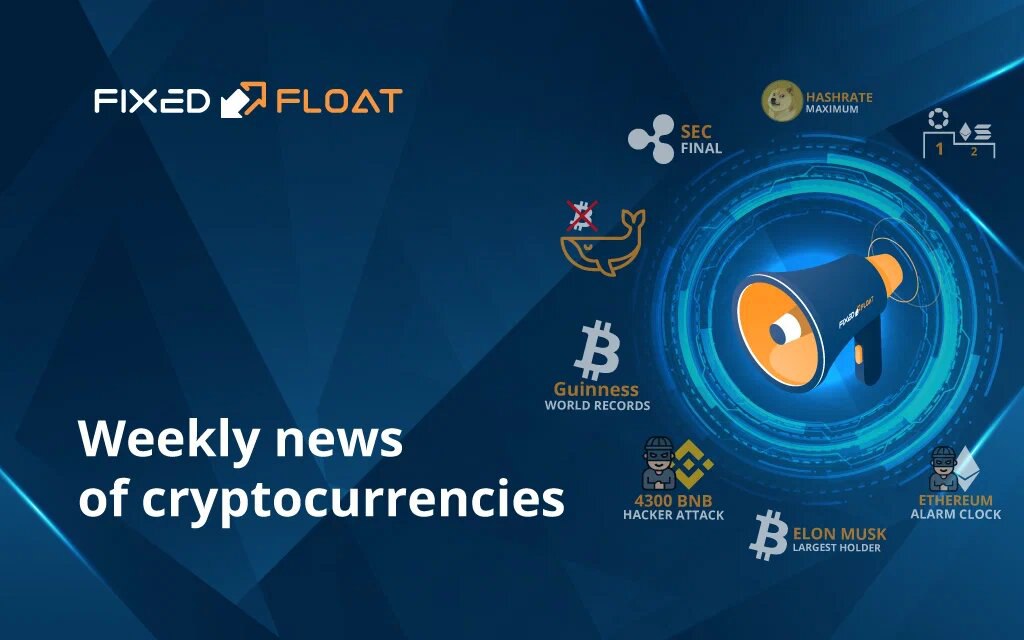 October has been a very rough one for the crypto community, not only because it took the bearish baton passed onto it by September and ran crazily with it but also because the crypto market has suffered several losses at the hands of hackers. But as resilient as ever, even though we fight a dangerous battle on two fronts, getting pummeled on one side by the weight of bearish collapse and on the other by the pains of losses to hackers, the crypto community will still overcome difficulties.

Bitkeep joined the list of crypto-related companies that have lost considerable assets to hackers this week. The Web3 multi-chain wallet suffered a massive loss as hackers stole over 4300 BNB from Bitkeep Swap. The loot was immediately transferred to Tornado Cash, a crypto transaction mixer to muddy the trail of the stolen funds. According to official reports, the hackers exploited Bitkeep’s official wallet, stealing over $1 million worth of BNB, making October the most profitable yet for hackers and the worst yet for the crypto industry.

Immediately after the discovery of the attack, The Bitkeep team swung into action to prevent further risks to the company’s assets. In a tweet credited to Bitkeep, the company stated: “Dear BitKeep Swap user, BitKeep Swap was hacked, and our development team has managed to contain the emergency. The hacker has been stopped. The attack happened on BNB Chain, causing a loss of about $1 million.

In response to the incident, Bitkeep has suspended its services. Services will be restored when Bitkeep is confident there are no other security issues. Bitkeep will also collaborate with security agencies to trail the looted funds and track down the hackers to recover stolen assets. Bitkeep Swap has stated that all affected users will be reimbursed a 100% of their funds and called for persons with relevant information that could assist security agencies in apprehending the hackers to come forward.

Bitkeep’s loss brings total asset loss to the crypto community to more than $700 million in about 12 different hacks. The frequency and successes of these hacks continue to cast a dark shadow on the crypto market, creating the perfect justification for detractors to dismiss the technology as another failed financial experiment.

Dogecoin hashrate peaks ahead of update

Following the news of Elon’s revived interest in purchasing the micro-blogging platform Twitter, Dogecoin seems to be reaping the benefits of positive sentiments surrounding the Twitter sale. The mining hashrate of the memecoin skyrocketed to a 7-month-high at 815 TH/s, suggesting an increase in computational power.

CoinWarz stats specifically stated that the Dogecoin hashrate hit a high of 815 TH/s on October 18th, marking a significant increase in the past 7 months. The Hashrate increase suggests an increase in processing power toward transaction validation on the memecoin’s blockchain. You would recall that Ethereum just transitioned from Proof-of-Work to a Proof-of-Stake network, making Dogecoin the second biggest PoW network. Crypto experts argue that the relocation of miners from the Ethereum platform to other PoW networks and the positive sentiments surrounding the news of the Twitter acquisition by the doge father and the possible integration of the Doge on the microblogging platform might be responsible for the increase in Dogecoin’s hashrate.

According to the Whalestats report, the spike in hashrate coincides with increasing trade volume on the BSC network. Recent data from Whalestats puts the total number of Dogecoins on the BSC network at 90,545,110 Doge, roughly worth $5,424,273. In related news, the memecoin giant has promised users an upgrade of Dogecoin with the scheduled release of 1.14.7 and 1.21. in the words of Patrick Lodder, Dogecoin developer, the 1.21 update promises to be a turning point in the future of memecoins. Patrick added that the 1.14.7 upgrade would be released before the year round.

Without a doubt, Musk is one of the biggest and most active influencers within the Bitcoin space and the general crypto market. His influence has done so much for crypto adoption that the community remains fond of the Tesla Billionaire. However, his electric motor company, Tesla, dumped 75 percent of its Bitcoin holdings in July, in what was considered a huge cut, as the crypto market slowly succumbs to death by a thousand cuts at the hands of a bearish recession.

However, in contrast to popular opinion, reports by Tesla on October 19th revealed the company holds over $218 million in Bitcoin, making it one of the biggest hodlers of the crypto asset. In earlier reports this year, Tesla revealed its Bitcoin holding to be $1.26 billion. The electric car manufacturer offloaded 75% of that amount, worth about $936 million, leaving the company with more than $200 million worth of Bitcoin on its balance sheet. Presently, Tesla remains a huge Bitcoin hodler behind MicroStrategy and Galaxy Digital Holdings at $2,48B and $313 million, respectively.

Polkadot is ahead of Ethereum and Solana in developer activity

However, while development activities seem to be on the rise on the parachain network, these developer activities have failed to translate into value increases for the Polkadot network. According to on-chain data from Token Terminal, daily trading volume and revenue have steadily dropped in the past six months. Revenue has declined by 80.2% in the last six months, 37.7% in the previous 3 months, 7.3% in the last month, and a whopping 26.6% over the previous seven days. Within the same period, transaction fees have also declined, according to Token Terminal. Subscan data shows, consistent with Token Terminal data that daily active users on the network have steadily plummeted since the start of 2022, with active addresses plummeting from 40,360 in November 2021 to 1,190 in October 2022, signaling more than a 95% decrease in daily active users on the network.

An end to the protracted battle between the US SEC and Ripple Labs might be in sight. In a meeting slated for October 20th, 2022, the US SEC and Ripple will discuss issues concerning the ‘institution and settlement of injunctive actions, institution and settlement of administrative proceedings, resolution of litigation claims, and other matters relating to examinations and enforcement proceedings. Crypto pundits hope that the 2 year-long legal battle between Ripple Labs and the SEC might be resolved during the meeting.

The crypto community awaits the outcomes of the meeting with keen interest, as it would set a precedent for future interpretations of cryptocurrency assets. An official release from the US SEC stated the meeting would be off-limits to the public and will only admit high-ranking officials. According to the Sunshine act notice, “Commissioners, Counsel to the Commissioners, the Secretary to the Commission, and recording secretaries will attend the closed meeting. Certain staff members who are interested in the matters may also be present.”

On October 19, the PeckShield team announced a discovered vulnerability in the TransactionRequestCore smart contract of the Ethereum Alarm Clock service. Ethereum Alarm Clock is a service that allows you to schedule future transactions by specifying the receiving address, amount and time of sending in advance. Hackers have found a vulnerability that helps increase transaction fees when reversing canceled transactions. In this way, hackers were able to steal about $260,000.

Whales get rid of BTC, small and medium investors accumulate

According to Santiment, small and medium-sized addresses on the Bitcoin network that hold between 0.1 and 10 BTC have a maximum coin supply of 15.9% of the total supply. Whales whose addresses contain from 100 to 10,000 BTC hold the minimum amount of coins - 45.6% of the total number of coins. This is quite unusual, since earlier in the bull market, the whales sell coins, and buy in the bear market. 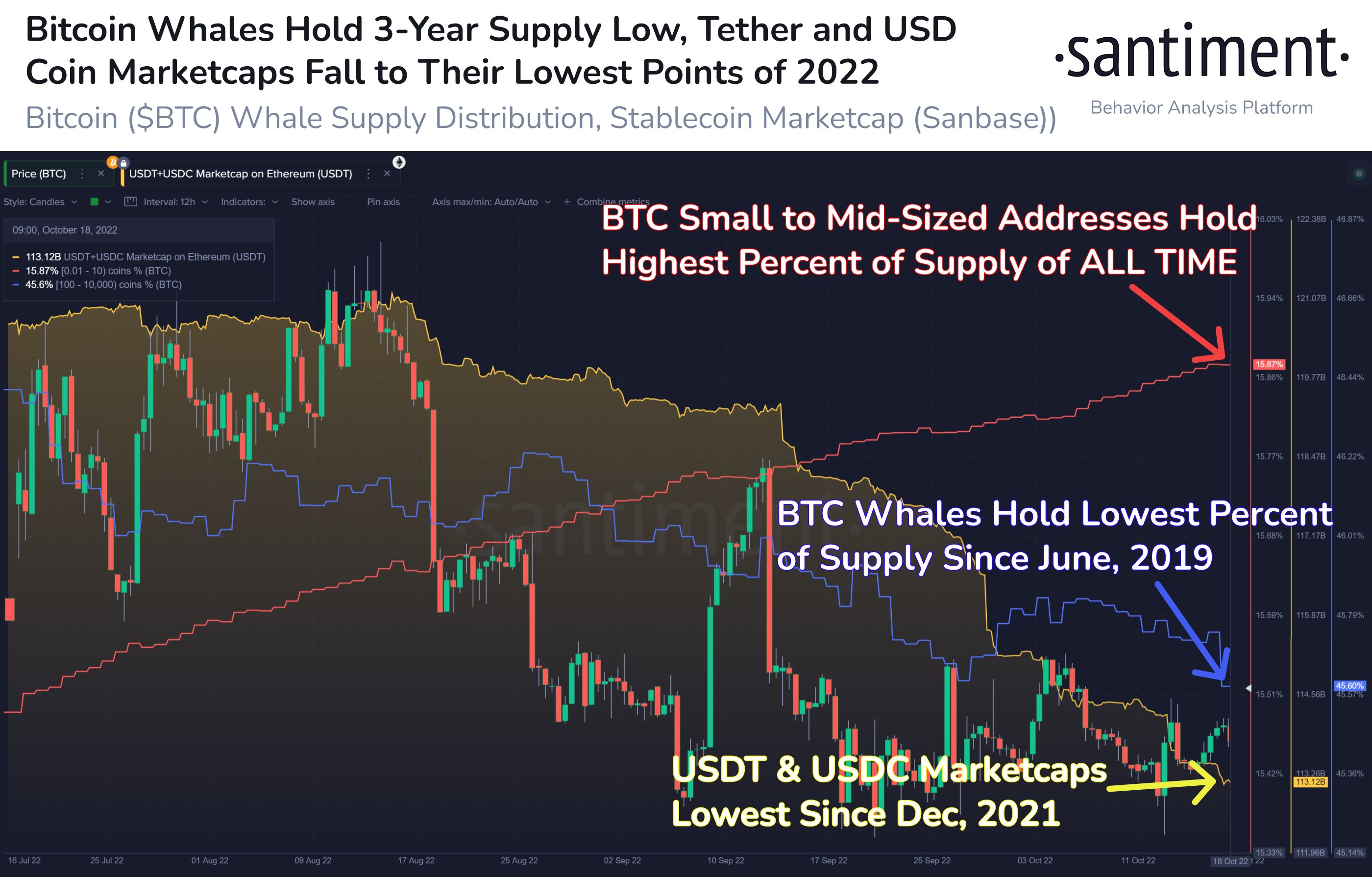