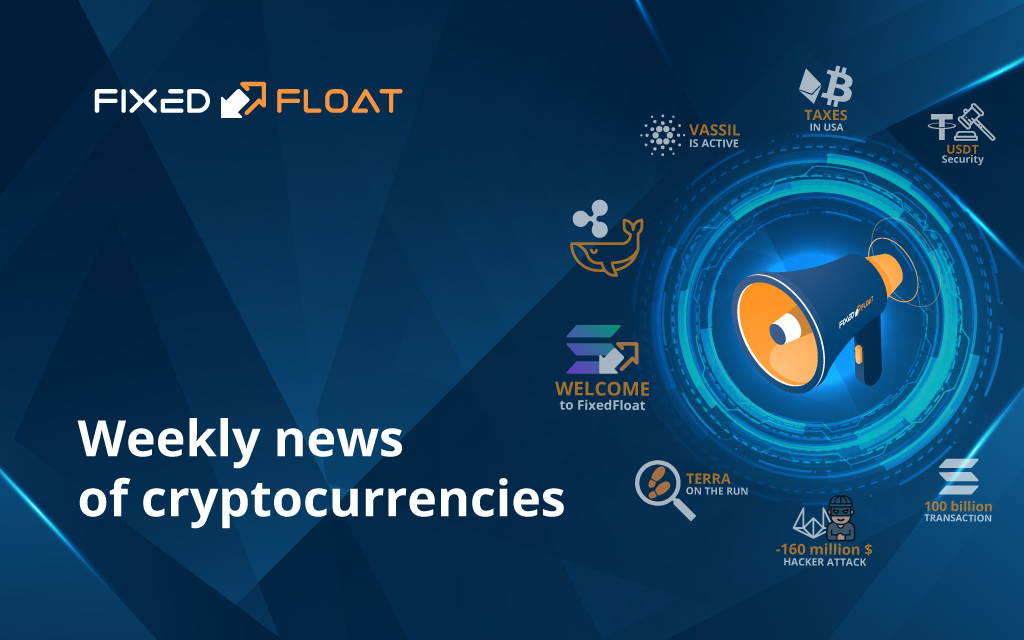 This week was remarkable as the tempo was cranked up, resulting in new moves that saw the entire market descend to new lows. Bitcoin touched the $18.466 level, last touched in June, signaling a new cycle of downward movement. While the community’s hopes for an imminent turnaround, technicals and fundamental indicators prophesy further cycles of descent.

The community also welcomes Cardano's Vasil fork and the first ever state-wide acceptance of cryptocurrencies for tax payment in Colorado State.

The week, however, ends with a stark reminder that the crypto community is not yet mature in terms of security, as hackers rob $160 million of Wintermute assets.

We are excited to welcome Solana to our FixedFloat platform! Solana (SOL) is a cryptocurrency that is used for staking and voting for updates and improvements to the blockchain. The Solana blockchain was launched in 2020 and is already in the top 10 cryptocurrencies by capitalization. More information about the currency is in our article Solana. Features and Benefits.

Wintermute lost $160 million in assets in a hacker attack

In an official announcement this week, Wintermute, the last addition to the TRON DAO, announced the company was the object of a brutal hack that left it $160 million short. Evgeny Gaevoy, founder and CEO of Wintermute, made the release via Twitter. He, however, added that the company's centralized and OTC services were still intact. Gaevoy also stated that Wintermute is "solvent with twice over that amount in equity left." According to Gaevoy, 90 tokens were stolen. Two of the stolen tokens were valued at $1 million and $2.5m, respectively. The remaining 88 were valued below $1 million. Wintermute's attack adds to the long list of hack attacks this year.

In April, over $600 million worth of assets were lost in the Ronin bridge hack, preceded by a $300 million wormhole theft. In July, $200 million was lost in a free-for-all-attack on the Nomad crypto bridge, while another $570 million was stolen from Curve Finance. Wintermute is undoubtedly the latest but surely not the last.

South Korean authorities say Terra founder is on the run

Just weeks after Terra jumped 200 places on the crypto market coin ranking, all hell seems to have broken loose for the community as South Korean authorities declare founder of TerraForm Labs on the run. The news comes after Singaporean police disclosed that the Terra founder is no longer in the country, contrary to what South Korean police supposed. Local correspondence Haykun stated that "the prosecution when started a forced investigation, such as a search and seizure; Kwon did not cooperate with the investigation, and around August appointed a lawyer and said that he did not intend to appear immediately at the prosecution." In response to the Singaporean revelations, the Korean authorities stated: "There was absolutely no room for cooperation with Kwon when he lied that he was fully cooperating with government agencies."

South Korean police moved to arrest the Terra founder and five other employees of TerraForm Labs last week on violations of the South Korean Capital Market Act. Their arrest warrant was, however, met with the news that the Terra founder was no longer in Singapore. Presently, the whereabouts of Kwon are unknown. However, Kwon stated that his whereabouts were his business, and he was not on the run. The Terra founder remarked that he and his team members have been above board in their dealings and have extended cooperative hands to the Korean authorities.

However, investigations are still ongoing as South Korean investigators try to uncover what led to the loss of over $40 billion in investor funds in one of the darkest events of crypto history.

Whales shift their focus from Ethereum to Ripple

After last week's Merger, the price of ETH underwent a major correction, shedding over 20% in a week. The event led to a change in the behavior of large addresses. The ETH sell-off in the broader crypto market remains serious. While other altcoins are recording 1% weekly losses, ETH is down over 20%.

However, there is one altcoin that is trading against the tide and that is XRP from Ripple. Over the past week, there have been active purchases of Ripple XRP, which has grown by 20% on the weekly charts. The recent surge in activity prices is due to reports that XRP will soon reach an agreement with the US SEC.

After two delays, the Cardano blockchain has finally launched the Vasil upgrade and hard fork, significantly improving network performance and capabilities, blockchain company Input Output Hong Kong (IOHK) tweeted on September 23. The update is part of the Basho era, one of the key development milestones for Cardano that focuses on optimization, scalability, and interoperability.

One of the significant improvements that Vasil has made to the network is the use of block transfers without full verification to ensure faster block generation. The update also made changes to the Cardano Plutus smart contract language, making it more efficient, allowing the decentralized finance (DeFi) project to build more powerful and cost-effective applications. However, all the features of Plutus v2 will become available to developers on September 27th.

The update was activated after several months of delays, which were caused by bugs found on its testnet. Originally scheduled for June, Vasil's launch was delayed by one month due to seven technical bugs that still needed to be fixed. In July, IOHK delayed the launch again to make sure all parties involved, including exchanges and API developers, are ready to transition.

Solana (SOL) is a decentralized finance (DeFi) network that values efficiency and throughput. It looks like it's paying off, as the network recently reached the impressive milestone of 100 billion transactions processed. At the time of writing, the exact number of transactions processed by the Solana blockchain is breathtaking — 100,612,863,567. At the same time, the cost of one transaction is practically insignificant and amounts to $0.00025 per transaction. This data proves that Solana lives up to its word when it comes to huge transaction capacity.

US state will accept taxes in BTC and Ethereum

This week, Colorado State joined the list of places that accept cryptocurrencies as payment options. The Colorado state announced that its residents can now make tax payments in cryptocurrencies. The announcement remarked that only Bitcoin (BTC) and Ethereum (ETC), Litecoin (LTC), and Bitcoin Cash (BCH) will be accepted.

In partnership with PayPal, the state revenue department will make the crypto payments possible since the Colorado Revenue Department is not allowed by law to accept direct cryptocurrency payments. The services will make it possible for residents and business owners in Colorado to pay individual income tax, business income tax, sales and use tax, severance tax, withholding tax, and excise fuel tax. According to Carr Daniel, spokesperson of the revenue department, "cyyptocurrency has been modified as an additional payment option for taxpayers who are ready to complete their online transactions to pay for their state taxes on Revenue Online."

Although crypto usage exists in other states of the US, like Miami and Florida, this move makes Colorado the first US state where residents can make payments for taxes using cryptocurrencies. However, similar services might be launched in Utah by 2023. In its announcement, the Revenue department stated its inability to directly accept crypto payments hence the need for PayPal, which will accept and convert crypto payments to US Dollars with a small fee.

The order was published as part of a case dating back to 2019 — an initial complaint by a group of investors against iFinex, Tether, and parent company Bitfinex alleging that the firm manipulated the cryptocurrency market by issuing fiat Tether with the intent to drive up the price of cryptocurrencies like Bitcoin.