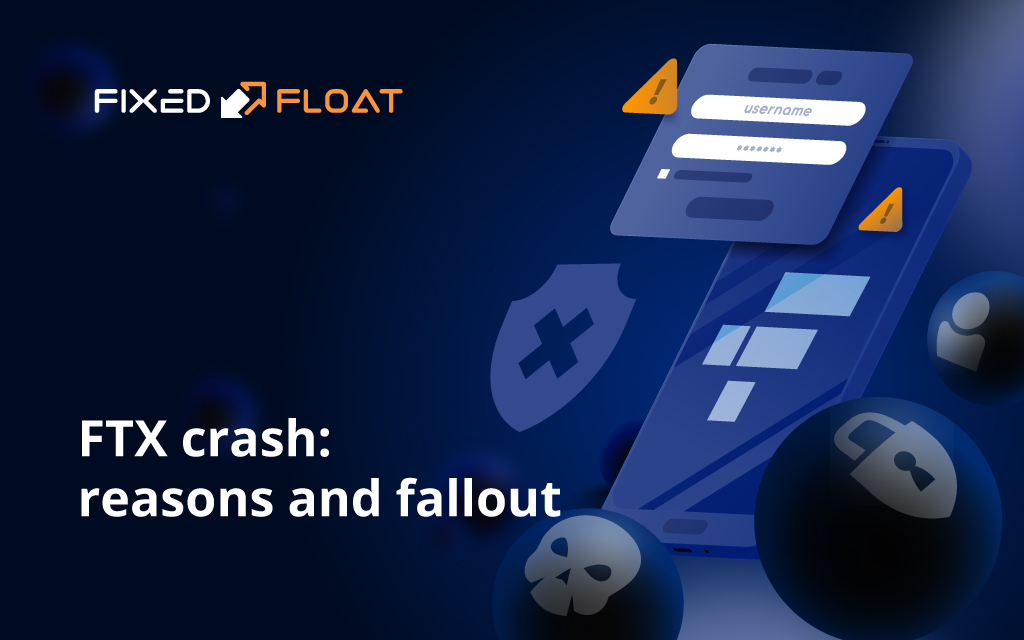 The crypto community has been going through hard times lately. But experts spoke quite positively about the future of cryptocurrencies, predicting a good BTC rate and the further development of the crypto industry. This was until November 2, when the beginning of the end of FTX happened. Even people outside the crypto community have heard about the bankruptcy of one of the most popular exchanges. In order to understand the reason for what happened, let's first get acquainted with the history of the creation of the platform.

Until recently, FTX was considered one of the largest exchanges, with a net worth of $32 billion in January 2022. Sam Bankman-Fried, the founder of the exchange, was the richest man in the world under the age of 30 with a personal fortune of $26.5 billion. The last couple of years have been extremely productive for FTX and Sam Bankman-Fried: sponsors have been attracted, new crypto companies have been purchased, partnership agreements have been concluded.

In parallel, Sam Bankman-Fried managed the Alameda Research hedge fund, which is a market maker for many popular crypto projects. The company has also established itself as one of the best analytical and research companies, having its own proprietary software for assessing market sentiment.

In December 2019, leading cryptocurrency exchange Binance invested heavily in FTX by purchasing a large stake in FTX. FTX has its own cryptocurrency token called FTT, which traders use for transactions such as paying fees. Last year, Changpeng Zhao, the founder of Binance, sold his stake in FTX back to Sam Bankman-Fried, who paid in part for it in FTT tokens.

Why did FTX crash?

On November 2, the crypto industry news service CoinDesk released an article that made a splash. It claimed that Alameda, a cryptocurrency hedge fund owned by FTX founder Sam Bankman-Fried, held billions of dollars of FTT token on its balance sheet, which was used as collateral in trading. This information raised fears that if the value of FTT falls, both FTX and Alameda will be severely damaged.

Changpeng Zhao, CEO of Binance, took to Twitter on Sunday about plans to sell FTT holdings due to recent revelations, citing a CoinDesk article about FTX and Alameda diluted funds. He compared the situation of FTX to the collapse of TerraUSD and LUNA this year, which brought down the cryptocurrency market and led to multi-billion dollar losses.

We did not have to wait long for the market reaction to such a statement. The price of FTT began to drop rapidly, FTX customers began to withdraw their funds in a hurry. Sam Bankman-Fried stated that within 3 days, users rushed to withdraw $6 billion. In normal times, daily withdrawals amounted to tens of millions. 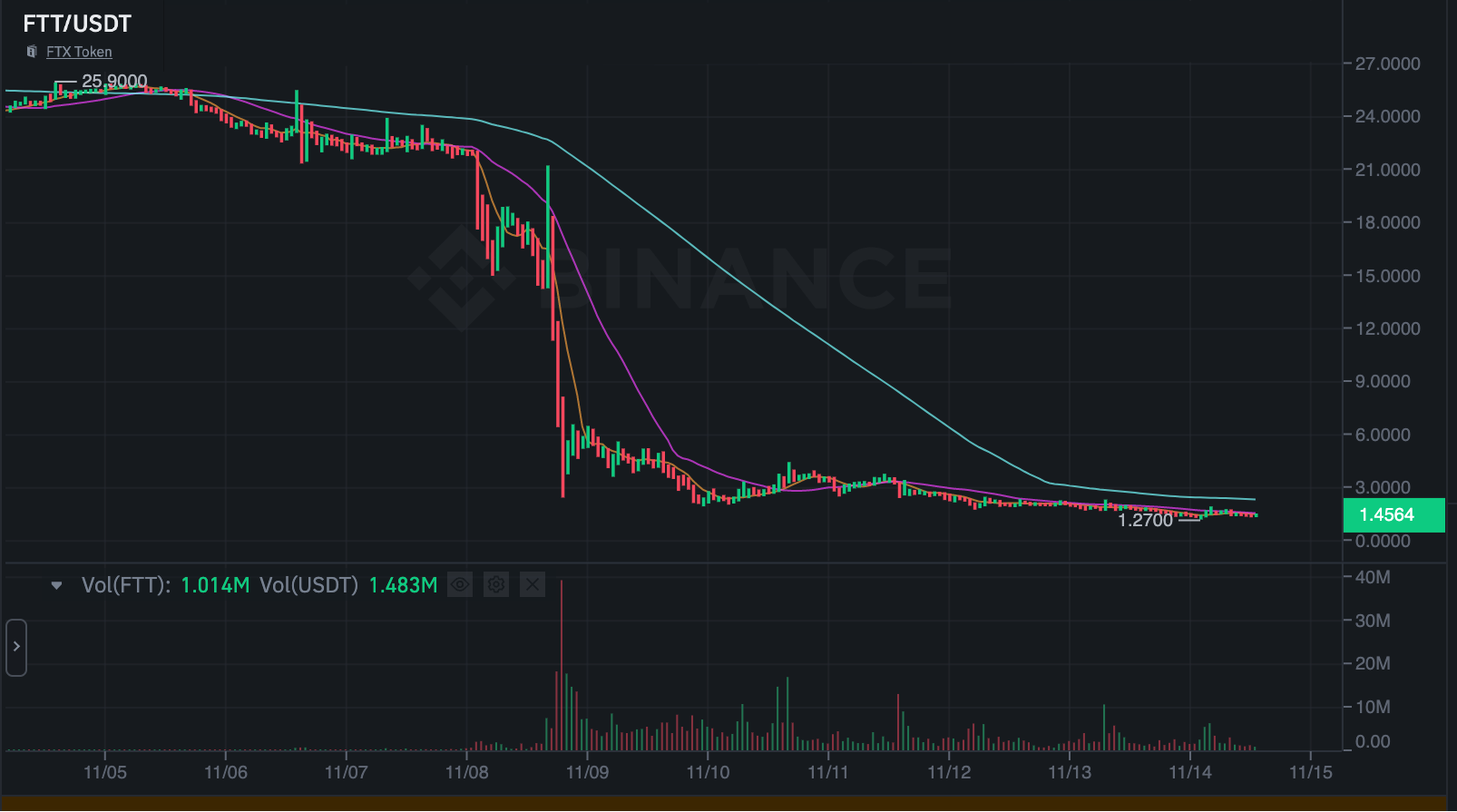 On Tuesday, Sam Bankman-Fried and Changpeng Zhao announced that they had signed a letter of intent from Changpeng Zhao to acquire an FTX subsidiary. Such a decision promised to help the bankrupt exchange and prevent an even larger market crash. In the evening, Sam Bankman-Fried announced the suspension of the withdrawal of non-fiat funds from FTX, accompanied by an apology and explanation of the liquidity problem.

However, the next day, Zhao stated on Twitter that Binance was pulling out of the deal, citing the results of a corporate review. Also, news about the mishandling of client funds and the alleged US investigation influenced the decision.

At the same time, a report from The Wall Street Journal appeared online, according to which Alameda owes FTX about $10 billion, which FTX lent to Alameda using customer deposits, which is a significant part of the exchange's $16 billion assets to support it after losses from a number of transactions.

On Friday, FTX announced the voluntary Chapter 11 bankruptcy of FTX, FTX.US and Alameda. Chapter 11 allows companies to restructure their debt and continue to operate, unlike Chapter 7 bankruptcy where assets are liquidated.

The next day, the FTX exchange reported a hack that resulted in the withdrawal of more than $ 600 million. A warning appeared on social networks that FTX applications were infected and should be removed, and Trojans could be caught on the FTX website. Trojans are malware disguised as legitimate software. Transactions to third-party addresses began to be massively sent from the wallets of FTX clients. Tether quickly responded to the information and blocked addresses with 30 million USDT withdrawn.

Various versions of what is happening in FTX began to spread in the media: from a hacker attack and hacking by former employees to a banal attempt by the management of the exchange to appropriate the balance of clients' funds. Earlier it became known that Sam Banksan-Friedman left for himself a loophole in the company's accounting system for imperceptible changes in the financial statements. So he was able to withdraw $ 10 billion from the exchange to his other company Alameda, leaving this fact invisible to the rest.

The consequences of the fall of FTX for the crypto market

The collapse of FTX has become a huge problem for the crypto community. The consequences of the fall of one of the largest exchanges affected everyone from ordinary amateur investors to crypto companies that went bankrupt as a result.

The most obvious implications for cryptocurrencies are:

Users who did not have time to withdraw their deposits from the FTX exchange are very concerned about the fate of their coins. In such a situation, experts recommend considering moving assets to a non-custodial crypto wallet.

Exchanges that are unable to withdraw their funds from FTX have been hit hard. So BlockFi froze withdrawals for its users. The company said that there is currently a lack of clarity on the FTX situation, which prevents business as usual. Previously, FTX was going to acquire BlockFi. Crypto.com stated that the collapse of FTX only marginally affects the exchange, but suspended the withdrawal of USD and USDT stablecoins on the Solana network without explaining the reason.

Now the crypto community is worried that the FTX incident will attract even more scrutiny from regulators. A number of politicians and famous people from different countries have already spoken out in favor of strict regulation. Investors predict a loss of confidence in cryptocurrencies and an outflow of funds from the crypto industry.

At a conference in Indonesia, Changpeng Zhao compared the 2008 financial crisis to the aftermath of the FTX crash. "We've been thrown back a few years," he said. "Regulators will rightfully scrutinize this industry much, much harder, which, to be honest, is probably a good thing."